Great article/interview in the Santa Barbara Independent by my friend, Ethan Stewart, explaining a bit more in depth about my slideshow…:) 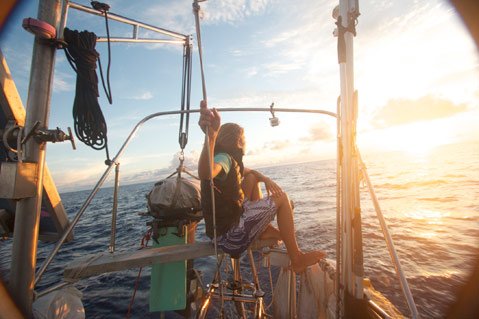 It has been almost seven years since Liz Clark took the helm of her 40-foot sailboat, Swell, and left the cozy confines of Santa Barbara Harbor for an adventure of epic and unknown proportions. At the time, the plan was to travel via wind power to sublime surfing setups the world over. And while that has certainly happened in the thousands of nautical miles she has logged (and continues to log) since the October day in 2005 that she set sail, something else markedly more powerful has transpired.

It seems the timeless and epiphany-producing powers of nature and solitude have worked on the young captain just as they have on untold numbers of explorers, thinkers, and activists before her. “I see humanity in an entirely different way now,” said Clark. “I see connections between things that maybe I didn’t see before, between people and the planet. There is this really human thing in all of us, and it connects us with the planet in a very special and important way. My environmentalism has evolved.”

This week, Clark, who is back in the States for a bit of family time as Swell waits patiently for her return in a harbor in French Polynesia, will be in Santa Barbara to host a slide show and talk at the S.B. Maritime Museum, a perfectly appropriate venue for the captain — and it is directly downstairs from the place she used to work as a bartender before she set sail.

An accidental sort of public speaker, Clark has dubbed her presentation Voyage to the Source and describes it as an “honest and personal fusion of everything I have been thinking about throughout my entire voyage.” More to the point, she said, it is a chance for her to share — and show — the lessons she has learned about herself and the world around her during her some 18,000 miles of sailing. In short, as is the case with most spiritual awakenings, hers is a story of how a largely self-gratifying surf trip (albeit a rather ambitious and impressive one) has evolved to become a journey with meaning and value far bigger than the captain herself. “Spend six years on a boat alone, and you are going to learn a lot,” laughed Clark.

Voyage to the Source: 2600 Miles in the South Pacific Examining Life Close to Nature

Taking the slow road (or ocean as the case may be) through far-flung places that are often unnamed specks on most world maps, the UCSB grad has had nearly daily doses of fundamental truths that the modern world often seems dead set on having us forget. She rattles off things like “seeing opportunity in adversity,” learning to not take food for granted, recognizing the deadly dangers of our collective plastics addiction, and harnessing the all-illuminating power of slowing down, sitting still, and listening to nature as just a few of the lessons she has learned. And, as important as these individual revelations may be, it is the type of understanding that they collectively open the door to that has Clark most jazzed. “It has given me a sense of peace about who I am and where I fit into this world as a human, as a living organism, and as a speck of dust in the universe. It changes your perspective on what is truly important,” mused the captain. “I’ve realized that the real first step in becoming an activist [for the environment] is being able to get outside yourself and really think on a larger scale for the planet …. I am so grateful [for being able to learn these lessons that] sharing some of them is the least I can do. If I can help even one person relate to their situation a little differently or ease their pain or make more conscious decisions then, for me, it’s worth it.”

Leave a Reply to lizzy